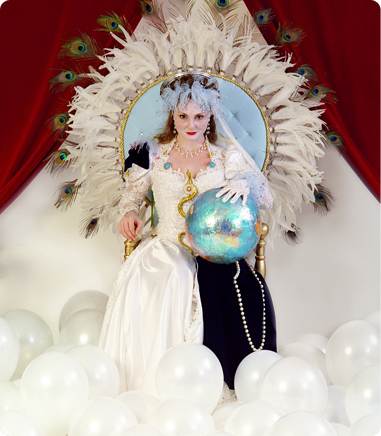 "Because IONA dancers train physically and spiritually, they execute moves intended to move you inside and out. To be in their eye beams is to give in to this extraordinary sensibility." Honolulu Star Bulletin

A gallery-style performance celebrating the power of the Divine Feminine.

The recognition of the need for women’s equality is one of the driving messages in Artistic Director Cheryl Flaharty’s work. IONA’s La Madonna seeks to place women in positions of spiritual power, using Christianity’s Mary as the launching pad for 10 - 15 living altars depicting ancient and contemporary goddesses brought to life through IONA’s mesmerizing dance style.

Just like the Happy Buddha, Flaharty spins her spiritual work on its side, using humor to light the dark. Surrounded by a mandala of cut fruit and inspired by feminist theory, Madonna of the Sacred Fruit’s chalice is a goblet of chocolate and the blade a butcher knife. Blueberries ride on the tip of her knife as she feeds her chocolate dipped wisdom to the audience - both male and female.
Who says chocolate isn’t a unifying force?

IONA’s 2012 Season featured La Madonna, and the show is currently playing in IONA's E Season. IONA Artistic Director Cheryl Flaharty had her sights set on turning the former Banana Republic space into a multicultural cathedral where SHE is boss. And it doesn't matter if you’re from Mars or Venus or any constellation betwixt, with a total of 20 performers, La Madonna provides 75 minutes of non-stop, 360 degree, interactive entertainment for all sexes.